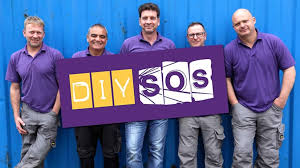 Background: DIY SOS: The Big Build is the BBC’s flagship renovation programme. In the 17 years the programme has been running it has helped over 80 families and …

DIY SOS: The Big Build is the BBC’s flagship renovation programme. In the 17 years the programme has been running it has helped over 80 families and communities across the UK. Following the devastation caused by the Grenfell Tower fire in North Kensington, London, June 2017, the community has been left scarred by the tragedy. DIY SOS: The Big Build entered a 6-month consultation with local residents with the hope to build a new community centre and a home for the Dale Youth Amateur Boxing Club which was previously based on the first floor of the Grenfell Tower.

The DIY SOS: The Big Build team seek expertise, materials and services donated from a wide range of UK businesses to help make their projects happen, Grenfell was no different. Under original plans a company had volunteered their products and services to install the façades on both the gym and community centre projects. Unforeseen circumstances led to the company not being able to fulfil the project in its entirety, so the challenge was on to find a new company to supply the façades for the community centre. Cembrit – a leading distributor and manufacturer of fibre-cement products in Europe – volunteered to step in but were under pressure to find a company that could precision cut the fibre-cement rainscreen façades to fit the building in such a short timescale.

Following a recommendation from an employee who had previously dealt with AIM, Cembrit approached AIM to see if they would be able to precision cut and deliver the fibre-cement rainscreen façades to site within 5 days. AIM was able to fulfil the fast turnaround and used available optimisation data and drawings to cut and number the panels, so they could be installed efficiently on site.

“The speed of reaction from AIM and the fast turnaround meant that Cembrit was able to supply its fibre-cement rainscreen façades to the Grenfell project at such short notice. The service was excellent, and the product was cut to the very highest of standards, making the installation process painless,” said Simon Mayes, UK Sales Manager for Cembrit Facades & Building Boards.

The project has been completed and DIY SOS: Grenfell has been aired. Both the boxing gym and community centre are now providing fresh new spaces for the community to continue to help one another and slowly start to heal. The grey precision cut fibre-cement façades on the community centre will age over time and fit in with the concrete aesthetic of the area, whilst the non-decorative façade on the upper half of the two-storey building is fronted with colourful corrugated metal which will add a splash of brightness to the design.

“It was a pleasure for Cembrit to be able to support such a fantastic project that is going to make a tremendous difference to the Grenfell community. AIM provided an excellent service with very impressive turn around times and precise dimensions that fitted in situ with ease. We are looking forward to developing a new-found partnership with AIM,” added Simon.

Tim Dalton, AIM General Manager, added: “As a company AIM prides itself on delivering a professional and efficient service. Cembrit has done a fantastic thing volunteering its product and services for the DIY SOS Grenfell build, I’m pleased AIM was able to assist with delivering such a fast turnaround to meet the project deadlines.”

Background: DIY SOS: The Big Build is the BBC’s flagship renovation programme. In the 17 years the programme has been running it has helped over 80 families and …

Keep Shopping
By continuing to browse our site, you agree to the use of our cookies.